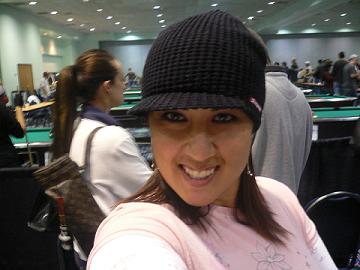 Many years ago, I stopped to watch a rookie WPBA player in her first or second professional tournament.  In one particular rack that I will never forget, she was straight in on the 8-ball and only needed to draw the cue ball back a few feet (easy on brand new cloth) to get straight in on the 9-ball.  Instead, she opted to play a stop-shot on the 8 and shoot a much more difficult cut shot on the 9.

When she did this, I almost snorted out loud in derision.  My first thought was “If you can’t draw the ball, you don’t belong on tour!”  In that moment, I couldn’t stand this chick because I felt like it was such an amateur move…that professionals would always draw the ball in that situation.  And in a decidedly catty way, I gossiped with other players and ridiculed the gal behind her back about taking what I perceived to be such a weak-ass shot.  (Not one of my finest hours in life, I’ll admit.)

Fast forward several months…and this gal and I have developed a friendship.  So one day, I asked her about that shot, AFTER sheepishly explaining to her how I had reacted and apologizing for making fun of her about it.  She explained that she chose to cinch that 8-ball and accept the harder shot on the 9-ball because she was nervous, and she didn’t want to miss the 8-ball by juicing it up with draw.  It wasn’t that she COULDN’T draw the cue ball…it’s that she felt more comfortable playing a stop-shop.  She did make the 9-ball and won the match, btw…so it’s hard to argue that her decision was wrong.

But argue it I must…because a long time ago, a very good player gave me this advice:  You should always take the proper shot, regardless of the outcome.
Great advice…until you ask someone to define what the “proper shot” is.  Obviously, there are different ways to play each shot on a pool table.  Some might draw where others would follow.  Some might use inside English and play a one-rail follow, while others would use low outside and send the cue ball 2-3 rails to get to the same general area.
So...being that there are multiple ways to get things done, I had to define for myself what the proper shot is.  I started watching more pool.  Those who know me know that I typically can’t stand sweating pool.  I don’t know why…but it bores me to watch others play.  However, I knew that if I wanted to get better, I needed to know the right way to play…the right patterns to use.  So, I watched and studied better players.  In doing so, I learned that the majority of them play 90% of shots the same way.  Yes, there is the occasional variation depending on how a player feels in that moment, but I’ve also discovered that those variations are very typically the cause of unexpected misses…especially in times of stress.  When a player know that they should follow a ball with inside english, but they choose to try a punch shot or a drag-draw instead (maybe because they just missed a shot earlier in the match using inside)…the outcome is usually not what they had hoped for.  You hear it all the time in the pool world…a player bemoaning a loss and saying how they know they should have done this or that…but they didn’t have the confidence to play it the right way at that time.

And that’s what it comes down to…confidence.  Once you allow yourself to not play the proper shot a couple of times, it can become a habit.  You start accepting harder shots instead of playing the correct position.  You take a flier at a low percentage combo instead of playing a safety.  These choices are usually dictated by fear.

So clear your minds in the New Year, and make a decision to play the proper shot.  Play it the way that you've seen Johnny, Rodney, Darren, Earl, Mika play it over and over again.  Even if you are nervous about it…just make the decision, commit to the decision, and accept that the outcome might not be perfect.  (Although I think you’ll be pleasantly surprised what can happen if you commit!)

The President of Dole Packaged Foods (which is the company I work for) just said in a recent meeting, “I don’t care about the results as long as we do things the right way.”
It’s great advice…in business, in pool, in life.

Happy New Year’s everyone.  Always take the right shot!
Posted by The Dragon Lady at 4:27 PM No comments: 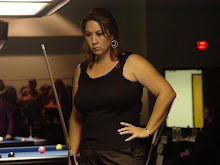 The Dragon Lady
Got the nickname when I started playing. The old guys around the pool hall gave it to me...partly because they said I'd breathe fire when I got mad...and partly because of my Asian heritage. It suited me...so I kept it.